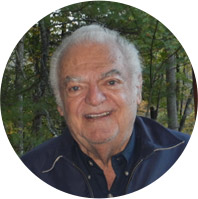 Bob Mumford is widely regarded as one of the foremost Bible teachers of the 21st century. Countless thousands of Christians, all over the planet, attribute their sustained, spiritual growth to Bob’s passionate proclamation of the Kingdom of God. His remarkable journey with the Lord started at age 12, but it was later, as a Pharmacists Mate in the US navy, that God’s sovereign call on his life emerged with unmistakable sovereignty.

Bob’s early ministry began, on the very naval vessel he was stationed, leading sailors to the Lord. It soon became clear that God had bigger plans and immediately after his discharge from the Navy, Bob entered Valley Forge Christian College. Here, he met Judith and in 1956 they got married. After graduating from college, Bob and Judith served for some years in missions, medical missions and pastoral care.

In 1963, Bob took a position as Professor of New Testament and Missions at Elim Bible Institute in New York. As the ministry grew, God directed Bob to complete a Masters degree at the Reformed Episcopal Seminary. This opened many doors to mainline denominational churches and for several years Bob and Judith traveled across the globe, ministering in both denominational and renewal congregations. Leadership, during the tumultuous years of the global Charismatic renewal, often came at great personal cost. It is precisely Bob’s readiness to share both his failures and insights into the word, that has made him a true mentor to the body of Christ. In recent years, God has released through Bob, a profound foundational word on “Agape” versus eros and a challenge to Christians to become “Human as God Intended”. Bob and Judith continue to serve the Lord with patient endurance.

What we are reaching for

All the resources created by Lifechangers and distributed freely across the planet, is designed to nurture the seed of Christ in you. We have a full conviction, that exposure to this proceeding word, will lead to profound personal transformation in every person willing to lay hold of it as well as corporate reformation in the body of Christ, as we find practical application in our families, communities and churches. The simple goal is to become “Human as God Intended” and what a journey it has turned out to be!

We are awakening to a startling spiritual reality. In some very practical ways, we are learning to surrender ungoverned desires and acting against ourselves as emigrants, being acculturated into an altogether different dwelling place [the Kingdom of God]. At the same time, we discover a deep mystery of what it means to be invited into the Love (Agape) of Three for one another and of God as Three sacrificial self-sharers [Father, Son and Holy Spirit]. Together, we are learning how that unfolding revelation affects the way we perceive not only God, but also ourselves and every other human being. Within this mandate, Lifechangers does not function as a church, denomination or Christian movement. Nor do we claim any absolute knowledge of the scriptures. Instead, we are simply witnesses and fellow-travellers on a kingdom journey.

How we communicate and Interact with you

Distributed to Kingdom co-workers and those wanting to stay informed about Lifechangers. Register on the website to receive your monthly newsletter via e-mail.

Live ministry and interaction – typically in small groups. Go to the events tab for a list of retreats and other events to register.

Prayer requests, testimonials and questions regarding any of our resources. Register on the website. Click on the "contact us" tab and let us know your thoughts.

Regular journals with in-depth studies of specific Kingdom truths. Download an electronic version for free or have a hardcopy shipped to you.

Free distribution of audio recordings from our live events as well as selected short-form nuggets explaining a specific concept or principle.

Downloadable documents (Pdf format) with Bible-studies that can be used for personal study or in group context.

Video recordings in short bite-sized versions (no more than few minutes each) as well as more in-depth teachings (typically recorded during live events).

Recommended readings from a variety of authors ranging from classical and theological to contemporary and devotional. You can order these from Amazon.com.

Uses Facebook as social media platform. Those with a specific desire for a deep-dive theological discussion of what we teach can ask questions, contribute and post comments. Contributions will be moderated due to the public nature of social media communications.

Facebook interaction that includes daily or regular short-form comments and encouragements from Bob and Eric.

The most challenging part to any journey is often just to start. We've created a few short introductory videos to get everyone on the tracks and to help orientate you as to the nature and direction of this journey into the Kingdom of God.